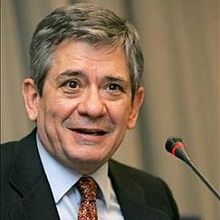 He holds a license in right of theUniversidad Complutense de Madridand in business administration at the Institut catholique d'administration et de direction des entreprises (Icade) and theÉcole supérieure des sciences économiques et commerciales (ESSEC) of Paris. He was then a professor of economic structure between 1966 and 1970to theUniversidad Complutense de Madrid.

Active member of May 68He belonged to the Socialist Convergence of Madrid (CSM) and was even one of the leaders of the Federation of Socialist Parties (FPS) in the early days of the democratic transition. It adheres to the PSOE in 1977following the dissolution of the WSC, and was elected deputy for Madrid during the first democratic elections. He was a member of the Constitution, Finance and Public Works Committees, and became the Socialist Group's spokesperson on economic and budgetary issues for five years.

Re-elected in 1979and then in 1982Enrique Barón is appointed Minister of Transport, Tourism and Communications the 2 December 1982at the age of 38. He was faced with the obsolescence of the railway network and launched a vast modernisation plan which led to the closure of lines that were little or not used at all. During the reorganisation of 4 July 1985It is replaced by Abel Caballero. The following year he joined the Foreign Affairs Committee of the Congress of Deputies.

President of the European Parliament

In 1992he took over the presidency of the Committee on Foreign Affairs and Securitywhich he abandons in 1994but still a member of the committee. The 20 July 1999He was elected President of the Group of the Party of European Socialists (PES), and held this position for the entire legislature. After the 2004 European electionsHe will be the head of the European Commission for two and a half years. Committee on International Trade. He is not standing for re-election. 2009 European elections.

In 2015, he is a candidate for the presidency of the Party of European Socialists.

Content subject to the CC-BY-SA license. Source : Article Enrique Barón from Wikipedia in French (authors)
Back to top
We use cookies on our site and we save your preferences to give you the best experience. By clicking on "Accept All" you agree to our use of all cookies. To change your preferences, go to "cookies settings".
Cookie SettingsAccepting everything
Manage consent