WYD in the forefront of Ukraine's accession to the EU 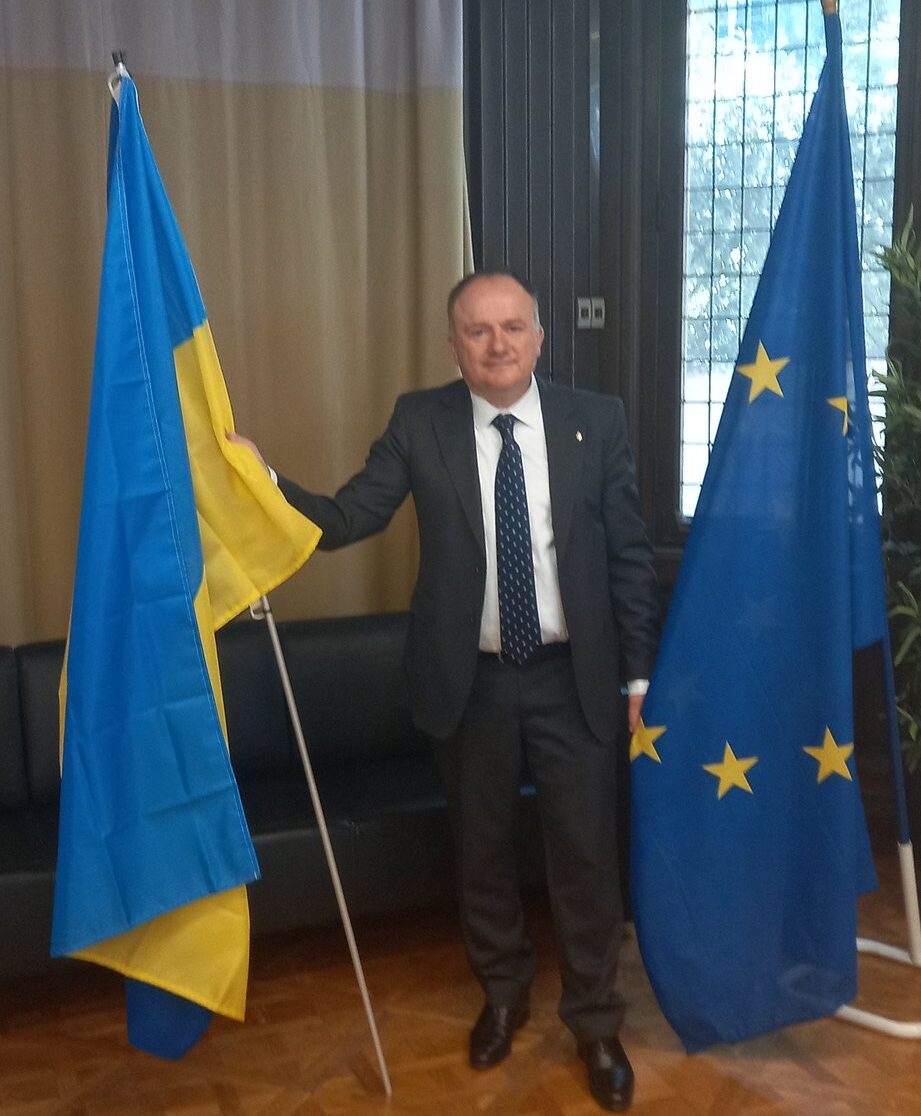 The "Kyiv Appeal" is published on the day of the outbreak of Russian aggression against Ukraine.

AJM at the forefront

for Ukraine's accession to the EU

Olivier VédrineThe Director of the WJA, published the "Kyiv Appeal" on 24 February 2022, the day of the outbreak of Russian aggression against Ukraine.
This Appeal launches the process of Ukraine's accession to the European Union.
Henri MalosseThe former president of the AJM has been involved in this process from the beginning.

Both explain the background to their work and the consequences of the EU's decision on 23 June 2022 to accept Ukraine as a future member.

Jean Monnet Association What is the meaning of the "Kyiv Appeal"?

Olivier Védrine I lived in Kyiv for several years and also worked with the Russian opposition to Putin. I participated in the Maidan revolution (NDR: The Maidan revolution, the name of the central square in Kyiv, took place between 18 and 23 February 2014 and led to the formation of a pro-European government). Before the outbreak of the Russian aggression, I had a good feeling about the risks of war, although nobody believed it. I had published an analysis of the different scenarios of aggression on 2 February 2022. I also sensed the very strong demand for Europe on the part of the Ukrainians.
So, on 21 February 2022, I published in the Kyiv Post the "Kyiv Appeal", wishing the Union to prove itself worthy of Jean Monnet, who called for the strengthening of Europe with the people. The "Kyiv Appeal" demanded that the process of Ukraine's accession to the EU be started without delay. On 24 February 2022, this appeal was published by la Tribune de Genève.
It immediately had a great impact in the enlightened circles of the Union and in Ukraine. Members of the Rada shared the Appeal, which then reached the Presidency. Volodymyr Zelenski, the Ukrainian President, then took up a number of points from the Appeal in his speeches.

Henri Malosse The Russian aggression did not start in 2022. The war started in 2014 and killed more than 15,000 people on both sides. It was necessary to react. And the European solution was an obvious one for Ukraine.
Its accession, within the framework of European sovereignty, which Philippe Laurette and I have supported since 2008, should be the main perspective for this country.
Olivier Védrine and I had a front row seat during the Mayan uprising in 2013/2014 and were both awarded the prestigious Order of St. Vladimir for our support of the Ukrainian people - that is our legitimacy!

O.V. (FR) Indeed. Ukraine's membership in NATO is a casus belli for Russia. We have to recognise the geopolitical realities. Giving Ukraine a candidate status gives a breath of fresh air, a huge hope, to the Ukrainian people without representing a provocation for Putin.

AJM What will be the path of Ukraine's possible integration into the Union?

O.V. This candidate status is not a blank check, it must be accompanied by a real political will on the part of the Ukrainian government.
This requires profound reforms. And first of all the fight against corruption. We know that the Ukrainian oligarchs will want to slow down the process, as a sign of their loss of political and economic power. But the people want to accelerate. The Maidan revolution, which was the work of civil society, already had anti-corruption demands. It is the people who must be right.
We Europeans must support him. The second learning curve is that of democracy, which Ukraine has little experience of. The country will therefore have to make considerable efforts, no longer have candidates for elections systematically presented by Oligarchs, work towards equality between men and women, etc...

H.M. The candidate status of Ukraine should strengthen the rule of law. We should not hide from the fact. We know that today the Kyiv government is banning parties - some pro-Russian but not all. We are also very concerned about the strength and activities of far-right groups.

O.V. We have to keep an eye on things. But the banned parties were undermining the war effort. It's not very clever on the part of the authorities, but you have to understand without necessarily accepting. As for the extreme right-wing groups, they are hardly represented in the Rada.

AJM How is this membership positive?

O.V. The Ukrainian accession process is a strong political and geopolitical symbol. Above all, it shows that Europe is not a technocracy but a project and values. It shows that Europe still defends the humanist ideas that were fundamental to Jean Monnet and the other founding fathers.

AJM What are the risks of membership?

O.V. It is certainly not a geopolitical risk of possible direct confrontation with Russia. This country already shares a border with the Union, through the Baltic States. And, for the moment, the Union is not considered a geopolitical entity by Putin.
On the other hand, there is a real economic risk. During the Soviet Union, Ukraine had a developed, diversified industry.
From 1991 onwards, the economy declined and shifted to agriculture and the extraction of raw materials. The Lugano Plan, decided on 5 July 2022, provides for $750 billion for the reconstruction of Ukraine.
This new "Marshall Plan" must not be hijacked by the Oligarchs and must not feed a Danaid's Barrel. It must genuinely enable Ukraine to join the ranks of developed nations.

H.M. As early as 2008, with Philippe Laurette, we promoted a European project open to all European peoples, provided that the rule of law was respected and the single market was integrated.
It is the role of the Jean Monnet Association to help, through the development of exchanges, the Ukrainian people in their long journey towards the Union.

Since 2008, with Philippe Laurette, we came to meet the Ukrainians to introduce them to the Monnet method and we told them that the European project was open to all European peoples. Ukraine, but also Russia one day, can join the European family provided that they respect the rule of law, our democratic values and have the capacity to integrate the single market.
It is the role of the Jean Monnet Association to help, through the development of exchanges, the Ukrainian people on their way to the Union, which we hope will be as rapid as possible, as the peace and stability of our continent depend on it.