Commemorations of the Franco-German reconciliation 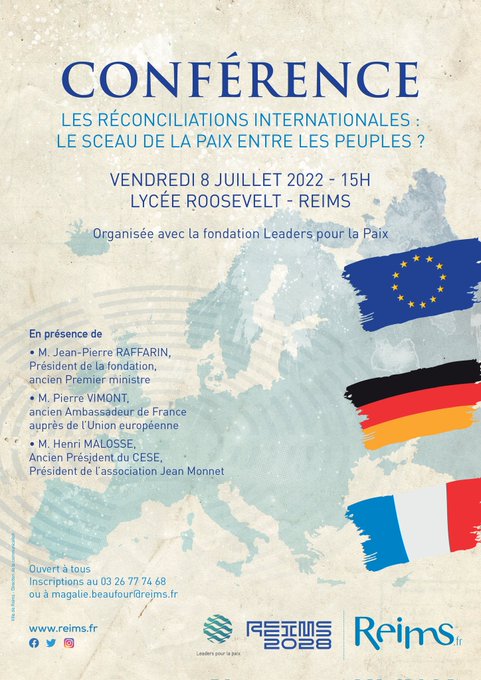 This date, 8 July 1962, is closely linked to the history of Reims Cathedral, which has marked the history of France and Europe for more than 1500 years!

The cathedral in Reims is dedicated to the Virgin Mary, as is the island of Corsica where I come from! For us, the Virgin, a figure of femininity, is a symbol of peace and gentleness,

The history of Reims Cathedral is intertwined with that of France, since the baptism of Clovis at the end of the 5th century, when 31 kings of France were crowned here. Twice burnt down in the Middle Ages, rebuilt, vandalised under the terror during the French revolution, devastated during the First World War and patiently rebuilt to its present splendour! (Note the 3 stained glass windows made in 1974 by the painter Marc Chagall, born in Vitebsk, Belarus)

But the history of Reims Cathedral is also symbolic of the history of Europe, since it was devastated during the First World War and it was in Reims on 7 May 1945 that the Nazi army capitulated. It is therefore not by chance that Reims Cathedral, the cradle of eternal France, was chosen by General de Gaulle and German Chancellor Konrad Adenauer, two fervent Catholics, to seal the reconciliation between the French and German peoples in a solemn mass on 8 July 1962, which we are commemorating today.

Today we must also remember the visit of Pope John Paul II, the Polish Pope, in August 1996, commemorating the 1500th anniversary of the baptism of Clovis. The Pope who told the European Parliament that Europe must "breathe through its two lungs, the Western and the Eastern".

A true reconciliation between two nations cannot only be a matter of a single currency or a market, but must have a spiritual dimension

The figure of General de Gaulle is often contrasted with that of Jean Monnet, the inspiration for today's Europe. But this is to forget that the two men, if they had a different vision of the organisation of Europe, did not share at least the essential part of it, i.e. a vision of reconciliation and peace.

Let us not forget that it was at the home of Jean Monnet and his wife Silvia in London, on 17 June 1940, that General de Gaulle came to dine, before pronouncing the appeal of 18 June. Mutual respect has always marked their relationship.

In 1940, in the face of danger, Jean Monnet proclaimed the need for total union. He wrote in his Memoirs: "When peoples are threatened by the same danger, the various interests which contribute to their destiny cannot be treated separately.

In Robert Schuman's declaration to the French National Assembly on 9 May 1950, a speech that was the foundation of today's Europe and inspired by Jean Monnet, we find the following sentences

"Europe will not be built all at once, nor in an overall construction, it will be built by concrete achievements creating first of all de facto solidarities. The gathering of European nations requires that the age-old opposition between France and Germany be eliminated. The action undertaken must first and foremost affect France and Germany.

The link with the need for Franco-German reconciliation is there in these essential sentences!

The Jean Monnet Association (along with a Foundation and an Institute) is working to bring Jean Monnet's ideas to life in the present, and in particular the quest for those "concrete achievements" that will anchor the construction of Europe in people's hearts. Thus, we are going to launch a project to set up integrated European civil protection teams, which will be just as useful in the face of climatic threats (forest fires, floods) as in overcoming the consequences and traumas of war (refugees, destruction, etc.)

From the Franco-German reconciliation sealed in Reims in 1962, I remember above all the concrete achievements that the Elysée Treaty would bring a few months later: the youth exchanges of the Franco-German Office, the innumerable twinnings between towns and villages, the economic contacts between consular chambers, the proliferation of initiatives from civil society

I myself am, in a way, the "product" of this, the son of a German teacher, involved in twinning at a very young age, having done part of my studies in Germany, even though I come from small towns in the South of France!

When I look at the state of Franco-German relations today, without going into the political and diplomatic areas that my two friends, Jean-Pierre Raffarin and Pierre Vimont, know much better than I do, I can only note a certain disintegration. I have seen this over the last forty years in Brussels at the level of the economic and social leaders I have known. The initial enthusiasm has often faded. German is taught less and less in France, just like French in Germany, and many twinning arrangements are going round in circles (not the one between Reims and Aachen!). There is a real danger here because a reconciliation must be, like a plant, cherished over the days, otherwise it will gradually die out. Reconciliations are not eternal if we are not careful!

We are gathered here to talk about reconciliation while the noise of arms can be heard just over a thousand kilometres from Reims. In fact, with the crisis in the Balkans and, since 2014, in Ukraine, the clash of arms had never completely disappeared from Europe. However, many people woke up as if "stunned" on 24 February 2022!

We at the Jean Monnet Association are very proud to have launched a "Kiev Appeal" on 24 February 2022, the date of the Russian invasion, to demand that Ukraine be granted candidate status in the European Union as soon as possible. At first, our appeal was met with much scepticism in Western chancelleries and also in Brussels. Today, we are delighted with this exceptional step forward, which was endorsed by the European Council on 23/24 June

Indeed, I consider that Ukrainians belong, like all European people, to one and the same family. This will not, of course, exempt Ukraine from complying with the rights and duties to which all candidate states must conform, but the signal given by the EU is historic. This hand extended to an aggressed and oppressed people is also a gesture towards the Russian people, who, when the day comes, will also be able to see their hand extended if they choose the path of peace and our common European values. Indeed, the European project is neither reserved for those in the West, nor for the wealthy alone! This is also the message of reconciliation of Reims, that of General de Gaulle who spoke of Europe from Brest to Vladivostok and that of Jean Monnet, a man who was an advisor to the Polish government between the wars and who did not hesitate to get married in Moscow.

Reconciliation in Europe cannot stop at the two peoples of Germany and France. What has been done between us has unfortunately not been done between Eastern and Central Europe and Western Europe: too few twinnings, too few exchanges between young people, too little real dialogue and listening! Even if it seems to have been bridged today in the face of the aggressor, the "gap" between these "two Europes" remains today! We must learn to make Europe "breathe through its two lungs", as John Paul II said!

Beyond that, a new wall lies ahead! After the fall of the Iron Curtain, between the Russians on one side and the Poles and Balts on the other, almost nothing was done to erase resentments, preconceived ideas and hatreds, which are unfortunately and naturally worsening today.

Is it too early to speak of Russian-Ukrainian reconciliation? As early as 1940, great minds such as Jean Monnet and certainly also General De Gaulle saw well beyond the victories of some and the defeats and capitulations of others, that a new world should take shape!

Reconciliations can indeed be the seal of peace between peoples!

They need both symbols, as the city of Reims and its cathedral have become today, but also small concrete achievements that will build, step by step, tomorrow's peace in Europe, not peace for peace's sake, but a true reconciliation in order to, by going back to our history, regain confidence in order to build a Europe!

A symbolic and ecumenical initiative of spiritual meetings between Christians from the East and West and beyond, in Reims with its cathedral as a symbol, could be a signal and a strong time to launch a call to union for a reconciliation of souls and hearts

Small concrete achievements, such as the planned twinning between the city of Reims and the city of Chernihiv in Ukraine, as well as an extension of the one that already links Reims to Aachen, will be a small stone in the edifice that we could build.

Let me end with a quote from our magnificent poet Charles Péguy, speaking of cathedrals:

"3 stone cutters are working on a building site. Someone passes by and asks them what they are doing:

So it is up to us to humbly cut the stone to build walls that do not separate us but that will one day become a cathedral!